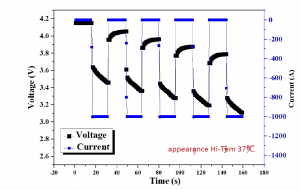 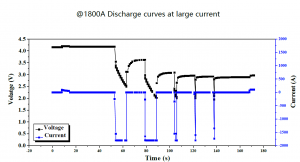 This specification followed the standard testing criteria: 1 atm, 25±2 ℃ and a relative humidity < 65%.

Resistance test: Charge the cell to 4.2V by 3C current and charge until 0.1C current by constant voltage, test it’s ACR at 1kHZ Ac impedance meter. By the way, once test its capacitance, recorded its 10ms voltage difference during the discharge process, and the calculated its DCR by R=ΔU/I. Note: the mix record time is 1s during the “Capacitance and resistance test “proces

Under the ordered temperature, constant charge the cell to 4.2V and then end it at 0.1C by constant voltage. After this, remove the cell to different temperature condition (keep 2h) and discharge it to 2.5V at 1C current, record its discharge capacitance.Cycle life test

Under 25±5℃, test the cell’s original performance by “Capacitance/resistance method”, and then charge it to 4.0V by 5C current, discharge it to 2.5V at 2Cconstant current, after this rest 5min, cycle this processes 2000. Regarded the testing process at one cycle, and repeated it 15 times, until it reached 30000 times.

Check the polarity of LIB before power on. No reverse connecting.

Keep LIB away from heat. The temperature has a big influence on the working life of LIB(LIC).